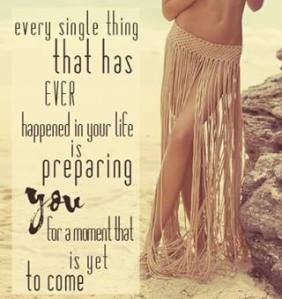 Today’s “31 Days of Estrogen” blog is from my beautiful First Lady, Josetta Cobb! She shares an awesome testimony of how God’s plans for our lives over rule any and everything the enemy tries to throw in our paths! Thank you Lady Josetta for lending your voice!

Isaiah 54:17 No weapon formed against you shall prosper…

Have you ever considered that if you weren’t going somewhere the devil wouldn’t be trying to stop you? The fact that you were born was not by happenstance. Maybe you have been told that you were a mistake, or that you weren’t planned, or that you were the “uh oh baby.” Fact of the matter is those things may have been so for your mom…to your dad but know that the truth is God makes no mistakes! Your parents may not have planned you but God has a plan for you! Your life has purpose; purpose was deposited in you by God before you even came into this world as we know it. Some may not know what their purpose is just yet but I guarantee you that the enemy knows and his goal is to prevent you from carrying out your ordained purpose. This is why he forms weapons against you but aren’t you glad that God said the weapons shall not prosper. God did not promise that no weapon would form against you; however, He did promise that no weapon would prosper!

Hated by the enemy but LOVED by God! When my mother learned that she was pregnant with me my grandmother made a “concoction” for her to drink that was supposed to have caused her to abort me. This was in the early 70”s and I guess that’s the kind of thing they did back then….My mother was 18 years old, married and I would be her second child. None-the-less the enemy did not want me to grace God’s green Earth and he used my grandmother…yea you heard me…my grandmother…my mother’s mother to initiate his weapon against my life. So; my grandmother was used by the enemy to form a weapon (a concoction a various liquids) against me while I was yet in my mother’s womb. I was under attack in the womb!! My mother drank it and evidently it did not work! I’m living to tell you about it! She made her some more…she drank it again…and yet again the weapon was formed but it did not prosper AGAIN! My God…my Abba Father in heaven kept His promise to me before I even knew He had made me a promise!

Fast forward 19 years later….I’m pregnant and for reasons of her own my mother did not want me to have my baby. Everyone considered my out of wedlock pregnancy my freshman year in college to be a “mistake” (by no means am I promoting teen pregnancy). I thought many things about my pregnancy but a mistake was not one of them. Let me say this…I did not intimately know God at this time in my life but I felt honored that He would trust me enough to bless me with one of His angels. OK so the attempt of the enemy continues…It’s before day in the morning the month that I’m due. All of sudden my bed is wet, my water had broken! In route to the hospital all of sudden all I could see was the brightest light and I had the worse headache of my life! I began having gramal seizures. I had toxemia/pre-eclampsia and did not know it causing my blood pressure rocket to stroke levels. A caesarean was not an option because my blood pressure was too high and my doctor said if they would have made the required incision to perform the caesarean I would have bled to death. The only option was natural birth. I gave birth while having multiple seizures throughout the entire 12 hour labor and delivery. Only God knows how I gave birth under those circumstances. My mother said hours into my delivery my obstetrician told her to call my family because I was not going to make it but thank God I made it! Once again the enemy came in like a flood and once again God rose up a standard against him!

My doctor advised me not to have any more children for 5 years. I did him one better I waited 7 ½ years and again the enemy was waiting to form a weapon against me. He waited patiently…recognize this; the enemy is always looking for an opportunity to attack but know this God will never leave you nor forsake you! It wasn’t until 6 weeks after giving birth to my second daughter. I was home alone with them (a 7 ½ year old daughter and a 6 week old baby girl). Again, suddenly I had the worse headache I only remember going to the bathroom and the next thing I recall is being told by EMS that “I was stroking out of here!” In that moment on that stretcher I was helpless. In that moment I didn’t know who I was…I couldn’t remember anything about me I just remember lying there feeling helpless but I was not hopeless. I remember beginning to black out but I was saying the 23rd Psalm in my spirit…”The Lord is my shepherd I shall not want yay though I walk through the valley of the shadow of death I fear no evil…” I remember that scripture giving me a peace. Once again the weapon of seizures formed against me and here today to say that once again they did not prosper! I’m told that my daughter who was 7 ½ years old at the time (the one they called a mistake, the one they wanted me to abort) called 911 when I began seizing in the bathroom. She was smart enough to tell the 911 operator what was going on with her mommy and she took care of her 6 week old sister until EMS arrived. I’m forever grateful for her and just think everybody thought me having her was mistake! God used her to save my life!

Recognize that weapons will be formed against you in many different ways on many different levels but know that they will not prosper! Don’t waiver when something or someone comes against you; rather it’s by way of sickness/disease, abuse, distractions, confusion, etc. just stand on the promises of God! I encourage you to take comfort in knowing that because God has purpose for your life He will protect your life! Rejoice when you realize that the enemy is trying to stop you because that simply means that you’re going somewhere!

2 thoughts on “No Weapon Formed Against You…”

Reports from my somewhat unusual life

Smile! You’re at the best WordPress.com site ever

The Only Way Out is Through

A Spirited Space For All Things Mama

My journey - The good, bad and the ugly

Doodles Invigorate
O at the Edges

Musings on poetry, language, perception, numbers, food, and anything else that slips through the cracks.

Disorder shall prevail thanks to Sister Entropy

Poetic Landscapes Of The Spirit

THE BEST OF POETRY